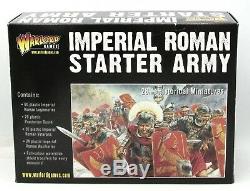 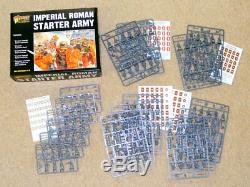 Hail Caesar - I mperial Roman Starter Army. Summary: 124 unpainted plastic miniatures for Hail Caesar or other 28mm scale Roman era games. Sword and shield, catapult and chariot - Hail Caesar is Warlord Games' rule set covering battles from the age of the Pharoahs through to the Crusades. Refight titanic battles such as Kadesh, Gaugemela, Plataea, Thermopylae, Hastings and the Crusades, amongst others. The perfect way to start your Imperial Roman army or add additional units of the bravest Soldiers to your army.

The Starter Army includes the following. 24 Auxiliaries (command not included). Comes with all the full colour transfers needed for the units. This product is supplied unassembled and unpainted. Glue and paints not included.

Figures are about 1 1/8" to 1 1/4" to top of head. Stock Number: WGA-IR-1 Contents: One Hundred and twenty-four (24) miniatures Sculptor: N/A. This is a hobby product and not a toy. Recommended for ages 15 and up. The item "Hail Caesar WGA-IR-1 Imperial Roman Starter Army (Box Set) Warlord Games Romans" is in sale since Saturday, April 29, 2017. This item is in the category "Toys & Hobbies\Games\Miniatures, War Games\28mm". The seller is "dzur2003" and is located in College Station, Texas. This item can be shipped to United States.