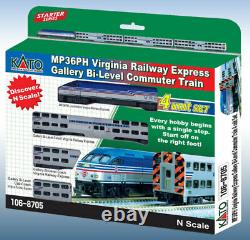 Brand Names You Can Trust. Add our store to your favorite stores and receive our exclusive emails about new items and special promotions! Brand New in Factory Packaging. In Stock Ships Within 24hrs.

Kato MP36PH VRE Locomotive Gallery Bi-Level Commuter Train Set. The Motive Power International MP36PH is used by a number of cities across the country for commuter service, their often distinctive and colorful paint schemes serving to make these locomotives the "figureheads" for local commuter service. The modern Nippon Sharyo-built Gallery Bi-Level is based off of the same concept as the original Santa Fe "El Capitan" Bi-level design concept, whose success went on to inspire such double decker cars as Amtrak's Superliners and the Bombardier Bi-Level car which is also used in commuter service. The Virginia Railway Express (VRE) operates as a suburban commuter line between the Northern Virginia suburbs and Union Station in Washington D.

And utilizes the modern Nippon-Sharyo gallery cars among others to move more than 17,000 riders per day. The MP36PH locomotive will use a sophisticated light piping and LED system to give it directional headlight and taillight functions across all six of its nose lights, as well as illuminated pre-printed number boards for push/pull operation. All cars and locomotives are DCC friendly, with FR11 decoders available for optional 11-209/210 Interior Lighting Kits with LED. Bi-Level cab coaches feature directional lighting for push-pull operation, with alternate illuminating headlight and taillights with an on/off switch for mid-train operation. Both the locomotive and Bi-level cars have prototype specific mold details to accurately represent the cars as they appear in the real world.

This item is in the category "Toys & Hobbies\Model Railroads & Trains\N Scale\Locomotives". The seller is "power_hobby" and is located in Mahwah, New Jersey.

This item can be shipped to United States, all countries in Europe, Canada, Japan, Australia.