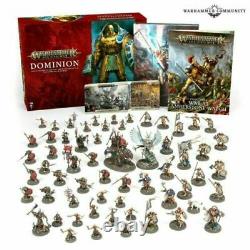 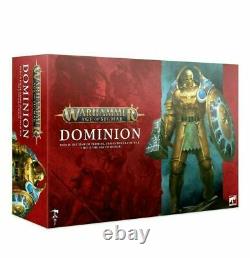 Warhammer Age of Sigmar: Dominion comes complete with two powerful armies, pitting the reforged Stormcast Eternals against the emerging threat of the Kruleboyz cunning and deadly orruks native to the swamps of Ghur. The set also includes a Dominion-exclusive version of the Warhammer Age of Sigmar Core Book, which provides extensive background information on the games fantastical setting as well as a full set of rules for playing thrilling games with your Citadel miniatures. 1x 360-page Warhammer Age of Sigmar Core Book (Hardback): Discover the lore of Warhammer Age of Sigmar and learn to master magnificent armies of valiant warriors, wild daemons, and more on the battlefield. This vast tome of knowledge includes all of the games core rules, three different styles of gameplay suitable for players of every level, variant game types for siege battles and tunnel fighting, and much more. 1x 24-page Start Here booklet War at Amberstone Watch: This supplementary booklet is exclusive to the Dominion box and provides newcomers with the perfect starting point for the Warhammer Age of Sigmar hobby, including the story and gameplay rules for a fateful clash between the Stormcast Eternals and Kruleboyz included in the box. 60x Plastic Push-fit Citadel Miniatures: At the heart of the Dominion set are two armies of brand new miniatures, each cleverly designed so they can be pushed together without the need for glue. Each force includes a flexible range of powerful units armed with devastating weaponry and wargear, and they can easily be bolstered with additional reinforcements to act as the elite core of a larger army. The chosen champions of Sigmar, plucked from their mortal bodies at the moment of their death and reforged as shining heroes clad in thick golden armour. Each Stormcast Eternal is a nigh-immortal warrior capable of fighting hordes of the fiercest monsters and emerging victorious. 1x Yndrasta, the Celestial Spear: Yndrasta is one of the most storied champions of Sigmar, charged with leading the God-King's forces across Ghur and serving as his ultimate beastslayer. The model comes supplied with a Citadel 65mm Round Base.

1x Lord-Imperatant with 1x Gryph-hound: Lord-Imperatants are amongst the greatest of Sigmars strategists. Each is a formidable warrior in their own right, their most notable strength lies in their ability to lead their forces as one unstoppable war engine. The model comes supplied with a Citadel 40mm Round Base and a Citadel 32mm Round Base.

3x Praetors: Praetor retinues are amongst the finest bodyguards in all the realms, linked to their ward at an arcane level. These models come supplied with 3x Citadel 40mm Round Bases. 1x Knight-Arcanum: Members of the mysterious Valedictor temple, Knights-Arcanum are unknowable but potent mages charged with protecting recovered ancient lore. 3x Annihilators: Dispatched to unleash Sigmars destructive wrath, Annihilators thunder into the enemy with such force that they scatter their foes like matchsticks. 10x Vindictors: Dauntless warriors of the Redeemer conclaves, the Vindictors are the shieldwall upon which the forces of ruin shatter. These models come supplied with 10x Citadel 40mm Round Bases. Emboldened by the arrival of Kragnos and eager to spread beyond the borders of their ancestral swamps, the Kruleboyz are a vicious, cunning breed of orruk who enjoy nothing more than laying their enemies low with the sneakiest, most underhanded tactics they can devise. 1x Killaboss on Great Gnashtoof: Particularly storied Killabosses can procure all manner of terrifying, swamp-dwelling mounts from the Beast-breakaz to show off their status. The model comes supplied with a Citadel 105mm Oval Base. 1x Murknob with Belcha-banna: Murknobs are champion warriors among the Kruleboyz, and they revel in taking the heads of their adversaries honestly or otherwise. 1x Swampcalla Shaman with 1x Pot-grot: Even for Kruleboyz, Swampcalla Shamans are foul creatures. These spell-flingers have an innate connection to the mires they inhabit, which they channel into noisome spells of debilitation while brewing up vile elixirs to aid their green-skinned kin.

The model comes supplied with a Citadel 40mm Round Base and a Citadel 25mm Round Slotta Base. 1x Killaboss with 1x Stab-grot: Killabosses are the warlords of the Kruleboyz. Each has wrested their position from rivals by being not only a potent warrior but also possessed of true Morkish kunnin. 3x Man-skewer Boltboyz: The fiendish poisoned crossbows wielded by the Man-skewer Boltboyz are powerful enough to take down a charging grunta with one shot. These models come supplied with 3x Citadel 32mm Round Bases.

10x Gutrippaz: Gutrippaz form the slimy heart of the Kruleboyz. These mobs of spear-wielding greenskins are known for their vicious kunnin and the spiteful amusement they find in laying low the enemy with their wicked, poisoned weapons. These models come supplied with 10x Citadel 32mm Round Bases. 20x Hobgrot Slittaz: These malicious little brutes delight in eviscerating the foe with their slitta-knives and employing explosive devices pilfered from their duardin paymasters.

These models come supplied with 20x Citadel 25mm Round Slotta Bases. 14x Warscroll Cards and 2x Allegiance Ability Cards: Quickly look up the stats and abilities of your Citadel miniatures with these reference cards, ensuring youll never need to go digging through a book right in the middle of an exciting game. Warhammer Age of Sigmar: Dominion is only available while stocks last, so dont hesitate to order your set today.

The item "Warhammer Age Of Sigmar Dominion" is in sale since Thursday, June 24, 2021. This item is in the category "Toys & Games\Wargames & Role-Playing\Warhammer\Warhammer Fantasy Battle\WFB Miniatures". The seller is "forestghostentertainment" and is located in luton. This item can be shipped worldwide.